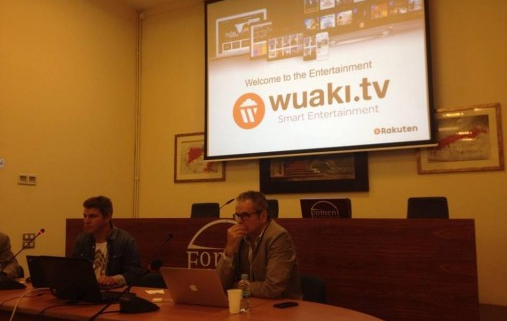 What is the role of Internet within the audio-visual sector, and what will this role be in the future? Which new business models will work best online? What online distribution strategies will emerge following the fall of analogue distribution? These are some of the questions that Juan Carlos Tous, founding partner of Filmin and Cameo, and Josep Monleón, content director of Wuaki TV, addressed during the session, organized at Foment’s headquarters by the Audio-visual Cluster of Catalonia.

Both Filmin and Wuaki TV are online distribution and content platforms, each of which has followed a distinct development model in the digital world. Wuaki TV, property of the Japanese group Rakuten, uses an international expansion model, offers content from major North American production houses, and has 1.5M registered users and more than 100 employees of over 10 different nationalities. In contrast, Filmin, with 9 employees, is a platform focussed on the local sphere which offers original version content, gives room to new creators, and participates in festivals and projects all over Spain.

Although both speakers presented different viewpoints, they agreed that the future of the audio-visual sector is connected to the Internet, a medium that will inevitably (re)define the consumption and distribution model practiced to date, and that the growth of this sector depends on an increase in the quantity and variety of devices, as well as on its capacity for interconnection.

Josep Monleón and Juan Carlos Tous also warned that the Internet presents certain challenges, as well as potential barriers to growth, such as the mistrust shown by some of the hegemonic sectors in the audio-visual sphere toward the digital world, the competition brought about by “piracy”, and the absence of institutional regulation.

The Audio-visual Cluster Expands Its Board of Directors