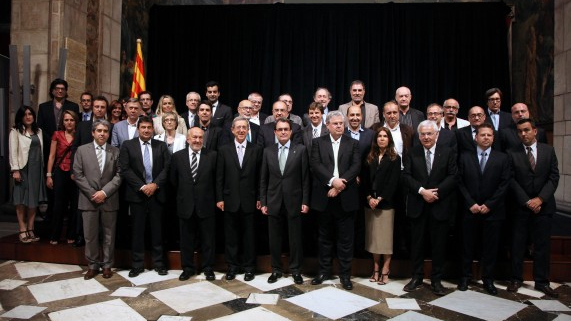 The Catalan Audio-Visual Cluster was presented this afternoon at the Palau de la Generalitat, during an event presided over by Artur Mas. This association has been promoted by several economic and industrial organizations and it brings together, for the first time, companies from the entire audio-visual production and distribution chain; as producers, distributors, exhibitors, radio and television operators, telecommunication operators and technological and service companies.

The Cluster is made up of around 50 promoting companies and its main goal is to strengthen the Catalan audio-visual sector so that it becomes one of the strategic industrial, economic and cultural sectors of the country for wealth generation. According to 2010 figures, the Catalan audio-visual sector invoices 1.700 millions of euros per year and employs 10.200 people, being one of the few sectors that creates jobs for those under 30 years of age. Therefore, the Cluster seeks to encourage competitiveness, efficiency and innovation, to create new opportunities and attract new investments, and turn Catalonia into an international reference point through the promotion of its new status as an industrial and cultural capital related to the audiovisual sector in the south of Europe.

The Cluster, with the support of the Generalitat de Catalunya, intends to be of service to all those companies and professionals that, in one way or another, could benefit from the growth in activity of an industry that mobilizes creative people, operators, technicians, service professionals as well as research and development of academic disciplines from the university world. The idea is to maximize the monetization of the resources and capacity of the collaborating institutions in order to reduce costs, produce synergies and work with maximum efficiency and unity to boost the industry.

The Cluster’s president will be Xavier Guitart i Domènech.

The UPF and the Catalan Audio-visual Cluster Will Collaborate in the Communication,...
Scroll to top