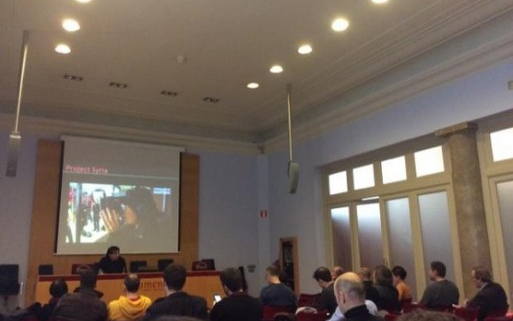 Television, cinema, production companies, advertising agencies…, the audio-visual world is adapting to new consumption patterns in which users are playing an increasingly active role. Building on this assumption, Ferran Clavell, head of innovation and future media at CCMA (Catalan Broadcasting Corporation), presented more than a hundred initiatives during his talk “Audio-visual Innovation Trends” organized by the Catalan Audio-visual Cluster.

Clavell expounded upon some of the diverse innovations that focus directly on content, such as Gogglebox, a TV program based on filming the audience while they watch television, or the format of Slow TV, which covers the real-time length of ordinary events (such as a seven hour train trip in Norway), or DogTv, a television program aimed at dogs.

Furthermore, he gave some examples of projects designed to give the user an active role in determining the content, such as the web documentary (ex. Alma), interactive music videos (ex. Bob Dylan), and video games that function as informational programming (ex: Fort McMoney) or investigative reporting (ex. Immersive Journalism).

Clavell also referred to initiatives aimed at the synchronized interaction between mobile phones and television (second screen), to simultaneously offer features across both platforms ranging from complementary information about content to the opportunity to participate in it (in the case of game shows and other programs). This kind of interaction is also beginning to be used in movie theatres.

Finally, he illustrated some of the strategies that the audio-visual sector is using to gain a larger presence on the internet, and particularly on social networks. “Television is no longer waiting for the user to seek it out anymore, but it is going to where the user is, such as Twitter, WhatsApp, Facebook or Youtube”, noted Ferran Clavell.