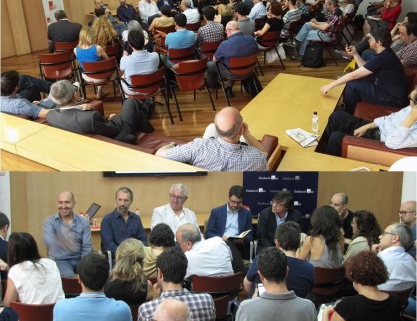 “Movie theaters, business trends and audience management” was the title of a session organized by the Cluster at the headquarters of the SGAE Catalonia, with the aim of reflecting on the present and the future of commercial film screening, its new business models, and its relationship with viewers, distribution and production.

Led by Pio Vernis, director of marketing at DeAPlaneta, the session brought together examples of already consolidated screening models such as commercial multiplex, represented in a local business model by Pere Sallent of Full HD Cinemas in Cornellà, and in a multinational company model by Lucas Albanell of Cinesa. Both are large-format models based on the mass public appeal that hold a large share of the market.

The session also included the presentation of other screening models. For example, Alberto Tognazzi of Screenly, a company dedicated to the organization of on-demand screenings, and Nacho Cerdà, of Phenomena Experience, a company committed to recovering classic films in a single-screen movie theater, presented their different models. They are examples of proximity film models with a selection aimed at segmented audiences.

Additionally, Carlos Fernandez from Filmax provided the point of view of a company engaged in the three areas of production, distribution and exhibition. He initiated the debate warning about the need to promote a greater integration of these areas in order to provide quality products tailored to the characteristics of the cinema rooms and the expectations of viewers.

Together, the speakers agreed on the urgency to attract audiences to theaters: “the common goal is to mobilize the viewer, to get them off the sofa.”. But they disagreed on how to achieve this. The multiplex commits to improving the technical sophistication of the rooms (large screens, enveloping screens, immersion experiences …) and to the marketing with an eye towards a greater understanding of the viewer. Screenly and Phenomena, meanwhile, operate with the philosophy that the value of cinema attendance resides in the collective experience and therefore they base their strategy on conceiving cinema screenings  as public events and their audience as a community.

“The Audiovisual Sector is not a Risk”
Scroll to top