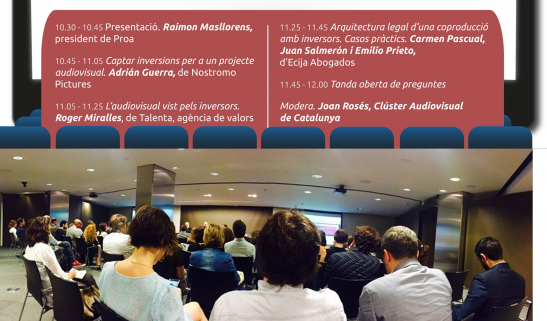 An audiovisual production can be seen as a financial product and, therefore, as an investment opportunity. This is an idea that is still seen as strange in the eyes of many investors, and even producers, but that is being gradually accepted both nationally and internationally, with increasingly abundant cases of success. This was the issue addressed in the session, “Audiovisual production, an investment opportunity”, organized by the Cluster with PROA, Talenta, and Ecija, in the Cercle d’Economia, and opened by Raimon Masllorens, president of PROA.

Adrian Guerra of Nostromo Pictures is a good example of a producer (in this case, from the film sector) that integrates private investment as part of the financing of his projects. During his speech he explained the way he relates to investors and at what stages of the production of the film he engages with them. “Be serious, plan the project well, provide security to the investor. Investors tend to be very loyal, and if you work well, they will surely continue to invest in your projects.”

At the same time, more and more consultants are advising their clients to invest in the audiovisual sector, such as Talenta, an investment service company. One of its partners, Roger Miralles, presented the process and the legal and financial structures normally used to secure investments in an audiovisual project. He also referred to the risks related to fiscal security, which in Spain can be a problem, given the arbitrary ways that tax inspectors can interpret the law. “In general, it is profitable to invest in the audiovisual sector, but must be done under certain conditions. First of all, the investor should be considered a producer. If it’s done well, and the projects become solid, the investor could receive returns of over 50% .”

Private investment is used to finance not only movies, but also series, documentaries and animation. Carmen Pascual, Juan Salmerón and Emilio Prieto, lawyers for Ecija, have extensive experience in advising on a wide variety of projects related to the audiovisual field. “Up until now, the field was dominated by films , but lately we also get series. In fact, with the arrival of Netflix and HBO in Spain and what is being offered by Telefónica, private investment in series is growing. Until now this was impossible because of the monopoly of TV´s with regard to rights and tax deductions.” Additionally, the lawyers highlighted that investors tend to prioritize audiovisual projects with an international character, since they guarantee safer returns.

In general, the speakers were optimistic. Tax deductions, they said, although still too low in Spain (except for better conditions offered in the Canary Islands and the Basque Country), provide favorable investment opportunities. It is expected that this will change as the situation in the country improves. In addition, the legal architecture is improving and, from the fiscal point of view, it is becoming increasingly safer to invest in the audiovisual field in Spain.

THE AUDIOVISUAL CLUSTER IS PART OF: