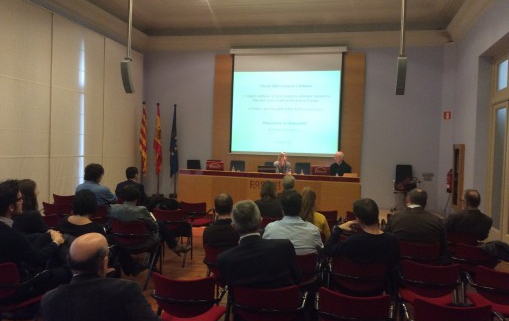 Are fiscal incentives really necessary to stimulate production? Do they benefit the local audiovisual sector? What impact have they had? These are some of the questions addressed by Jonathan Olsberg, president of the British consultancy Olsberg-Spi, at today´s meeting, titled “Fiscal Incentives: The Audiovisual as an Economic Engine¨, organized in Foment del Treball by the Catalan Audio-visual Cluster .

According to Jonathan Olsberg, fiscal incentives, which more and more European states tend to offer, not only have a positive economic impact in the countries implementing them, but also benefit local companies involved in foreign productions since fiscal incentives promote interaction with international companies, attract foreign investment, facilitate the formation of co-productions, and stimulate the mobility of workers and the acquisition of experience.

This is evidenced by the fact that countries with high production costs which do not offer incentives (as is the case of some Scandinavian countries), have tended to lose foreign investment to other countries that did apply fiscal incentives (such as Iceland) .

In addition, Olbserg remarked that the audiovisual and creative industries in general are one of the sectors with higher economic multiplier effect. In the case of the UK, according to the results of a study carried out by the same consultancy, Olsberg-Spi, every pound invested in incentives delivers more than 12 pounds of Gross Value Added to other sectors and 3.74 pounds in additional revenues to the government.

The Internet and the Audiovisual Sector Meet In the Digital & Media Fo...
Scroll to top