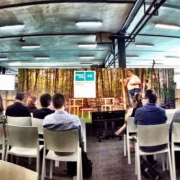 The Catalan Audio-visual Cluster, together with Barcelona Tech City and Sónar+D, organized the second edition of the Digital&Media Summit, a meeting between audio-visual companies and the technological and digital world.

Around fifteen companies from each sector shared their experiences and explored new ways of collaborating on projects of mutual interest. The session was moderated by Josep Lluis Sanchez Brugarola, from Infonomia team.

The Catalan Audio-visual Cluster and several Catalan universities have agreed to launch the first University-Industry Audio-visual Pitching, a platform conceived to give university students an opportunity to present their best projects in development to the audio-visual industry. This was the first time that a global agreement has been signed between the communication faculties of Catalonia and the industry, represented by the Audio-visual Cluster.

On October 21st and 22nd, after a pre-selection of projects (selected first by the universities and second by the industry), 27 fiction films, documentary films and new media formats will be pitched to some of the sixty companies from the Catalan audio-visual world.

A pitch session consists of a short presentation of an audio-visual project to potential donors. The pitch is aimed at capturing their attention and thus starting negotiations for a possible funding or collaboration agreement. The aim of this pioneering initiative is to facilitate the professionalization of the students in the final phase of Audio-visual Communication and/or Filmmaking undergraduate or master’s degrees. It also aims to build bridges in order to facilitate the incorporation of the new university class into the industry and to spot emerging talent.

The first edition of the University-Industry Audio-visual Pitching Session will be held at the CCCB (Centre de Cultura Contemporània de Barcelona) on the 21st and 22nd of October. 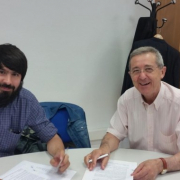 The Catalan Audio-visual Cluster and the Associated Scriptwriters of Catalonia (GAC) signed a collaboration agreement through which they commit to work together on the promotion, knowledge base, distribution and strengthening of the Catalan audio-visual sector.

This agreement, signed by Xavier Guitart, president of the Cluster, and Marçal Cebrián, president of GAC, seeks to create areas of collaboration points between scriptwriters and audio-visual companies, and to ensure the participation of both in activities and projects of mutual interest.