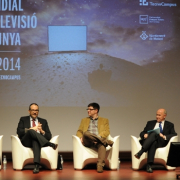 The Catalan Audio-visual Cluster and the Tecnocampus of Mataró celebrated the World Television Day in Catalonia in a discussion series that brought together critics, journalists, media managers and producers.

The event consisted of three round-tables, gathering participants from different sectors that invited the audience to think about the evolution of the world of television, the changes in consumption patterns, and the transformations and new challenges that the sector has to face with the emergence of the internet and new technologies.

Fernando de Felipe (La Vanguardia), Manuel de Luna (El Periódico) and Paula Hernández (Vertele.com), who sat together in the first round-table, “What television we have. The critics talk”, all agreed that more innovation is required in the TV industry in order to attract new audiences, and especially the youth audience.

In the second round-table, “What kind of television can we do in Catalonia”, participants Antoni Pemán (CCMA), Oscar Nogueira (8TV), Ángel Casas (Barcelona TV) and Joan Foguet (XAL), highlighted the difficulties that the sector faces, with the reduction of Catalan audio-visual productions due to the decrease of public resources and the concentration of the advertisement market in the hands of only two large corporations.

The debate in the third round-table, “The coming TV”,focused on the challenges that stem from interactivity, the rise of the live broadcasting, new online content operators and business models that respond to new patterns of consumption. The participants were Xavier Fisa (Lavinia Interactiva), Ferran Clavell (CCMA), Xavier Redón (Abertis Telecom), Jaume Ripoll (Filmin) and Álex del Olmo (Tecnocampus). 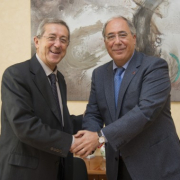 The Catalan Audio-visual Cluster, represented by its president, Xavier Guitart, and the University of Lleida (UdL), represented by its rector, Roberto Fernández, have signed a collaboration agreement in which both institutions commit to establish channels for the exchange of information, training, dissemination, innovation and research in the audio-visual, communication technologies and cultural fields.

Moreover, this agreement allows the University of Lleida to participate in the “Audio-visual Pitching” project promoted by the Cluster, which seeks to establish contact between students involved in quality audio-visual production projects and companies from the sector which could potentially be interested in them, and would also allow students from the Audio-visual Journalism and Communication and the Master of Audio-visual Business and Digital Convergence programs of the UdL to take on internship positions in the companies associated with the Cluster.

Through this agreement, the UdL joins those Catalan universities that already collaborate with the Cluster, such as the Autonomous University of Barcelona (UAB), Pompeu Fabra University (UPF), the University of Vic (UVIC) and Ramon Llull University (URL). “Maintaining a close relationship with the universities is essential for the Cluster”, Guitart states, and stressed that the Audio-visual sector is the sector with the highest proportion of young, highly-trained workers.

In turn, Roberto Fernández stressed the importance that a collaboration with the Cluster will have for the Audio-visual Journalism and Communication program, as a Catalan institution aiming to have an international presence. 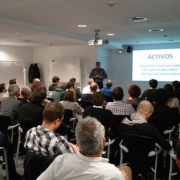 In order to stimulate the exchange of knowledge between companies from the audio-visual, internet and design sectors, and to promote the (co)creation of  joint projects, the Catalan Audio-visual Cluster, together with the Barcelona Design Innovation Cluster, Cluster Ecommerce & Tech Barcelona and Barcelona Media, organized the session, “Collaborative Innovation. Speeding up innovation in the cultural and creative industries. Promotion of Inter-sectorial Collaboration.” at CosmoCaixa Barcelona.

The session was led by Josep Lluís Sánchez Brugola, an expert on innovation, creativity and strategy who presented the latest trends in innovation and gave some examples of new working methodologies based on collaboration between companies from different sectors.

This meeting is part of an ongoing series of sessions about innovation that began last June during the Digital&Media Summit of Sonar +D.