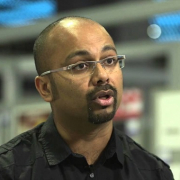 On May 29th in Barcelona the Catalan Audio-Visual Cluster, in collaboration with the Royal Melbourne Institute of Technology (RMIT University), organized the session “Strategy, innovation, and creativity in a rapidly changing digital world” in which Indy Saha, director of strategy of Google Creative Lab, participated as a speaker.

During his talk, Saha presented the Google Creative Lab, an interdisciplinary team based in London, but with several working groups scattered between different cities, such as New York, San Francisco and Sydney. Its main goal is to create pilots and prototypes for new products and services linked to the internet, as well as to promote the use of the Net for the development of new creative and educational projects.

For example, Saha presented “DEV.ART Art made with code”, a platform created by Google that hosts several artistic projects based on the use of data; the Google Science Fair, created as on online platform to encourage young people to improve their scientific and innovation skills; or the Hangout Comedy Club, which transforms YouTube into a platform for humor-based content.

Lastly, Saha reflected on the need to produce new work dynamics based on collaboration between people and companies, research, multi-disciplinarity and trans-disciplinarity. He celebrated the existence of the Catalan Audio-Visual Cluster, while encouraging the companies involved in the Cluster to apply new ways of working that prioritize innovation and creativity, one of the keys to Google’s success.

The Catalan Audio-Visual Cluster denounces the possible closure of the Catalan Broadcasting Corporation (CCMA) channels that may follow the restructuring of the radioelectric domain by the central government.  This measure would have a negative impact on the Catalan audio-visual sector, which is already strongly affected by the economic crisis.

The Cluster points out that several TV channels from around the country have closed over the last few years. This, along with the economic difficulties that the country faces, causes the accelerated decline of the audio-visual sector, resulting in the closure of companies, loss of jobs and brain drain. If this trend continues, the audio-visual sector could quickly face a scenario similar to that of twenty years ago: a great concentration of channels and a weak industrial fabric.

It also states that the reduction in the number of channels or the decrease in the availability of high definition pushes the Catalan sector away from the market and the European standards.

The Catalan Audio-Visual Cluster remarks that the restructuring of the radioelectric domain is a technical matter and there are several alternative solutions which can be examined when there is a strong spirit of dialogue and collaboration. Due to the current situation faced by the audio-visual industry, the Catalan Audio-Visual Cluster asks the public authorities to create a technical commission where the sector could develop new solutions for the future.